Announcing an Outstanding Opportunity to see an African film and its director which has garnered accolades and awards, attention and controversy. Joseph Gai Ramaka, a celebrated filmmaker, studied Filmmaking and Visual Anthropology in Paris. Over the last 15 years he has written and directed many documentary and feature films, founded production and distribution companies in France and Senegal, and is a prominent activist for freedom of the press throughout Africa and the world. "Karmen Gei" (86 mins.), a modern adaptation of Bizet's opera Carmen, caused a storm of controversy in Senegal due to its bold portrayal of religion and sexuality. The film has been effectively banned in Senegal, largely due to a protest over its use of a sacred Muslim text in a Catholic funeral scene. Also banned in Senegal, Ramaka's last project is a film "essay" blending documentary and fiction. And "What if Latif were Right!/Et si Latif avait raison!" (95 mins.) is a strenuous critique of the regime of Senegalese president Abdoulaye Wade, a fiery opposition leader for four decades before his landslide election in 2000. Wade's increasing restrictions on the media and free expression are the focus of Ramaka's hard-hitting new film. "Karmen Gei" will be shown at Fair Grinds Coffeehouse, as a part of Michael Tannen's Film Club February 20 at 8:15. The film is FREE and the director will be present. Robert Thompson, owner Fair Grinds Coffeehouse 3133 Ponce deLeon New Orleans, LA 70119 (504) 913-9072 fairgrinds.com info@fairgrinds.com 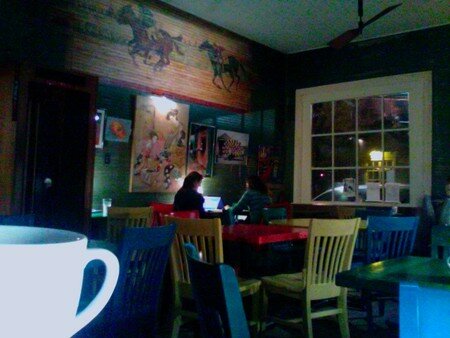